The Etruscan Sarcophagus of the Spouses: A Feast for the Dead

The Sarcophagus of the Spouses is considered to be one of the greatest masterpieces of Etruscan art. The Etruscans, who originated in Italy between the Arno and Tiber rivers, are well known for their terracotta sculptures and funerary art in the art history world. The Sarcophagus of the Spouses is perhaps the most famous example of Etruscan funerary art and dates back to the sixth century BC. Found at the Banditaccia necropolis in Caere, it can now be seen at the National Etruscan Museum in Rome. It gives us a fascinating insight into not only the Etruscan art world, but also Etruscan views on women’s place in society and life after death. 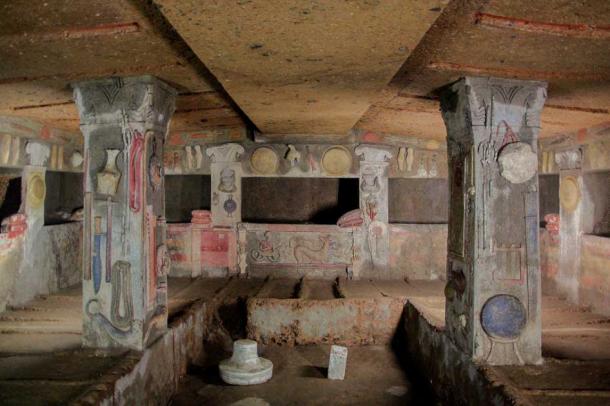 Interior of the Rilievi Tomb in the Banditaccia necropolis. (Roberto Ferrari / CC BY SA 2.0 )

What is the Sarcophagus of the Spouses?

Made of terracotta, the Sarcophagus of the Spouses depicts a man and a woman reclining on a kline, a dining couch with cushions for comfort. The men and woman both have heavily stylized hair, plaited with braids. The woman’s braids hang stiffly at the sides of her neck. The proportions of their bodies are elongated, as was common in archaic period artworks.  The couple is depicted as smiling, with almond-shaped eyes meant to give them a happy or content look. The man is barefoot, while the woman wears pointed shoes, an Etruscan characteristic. 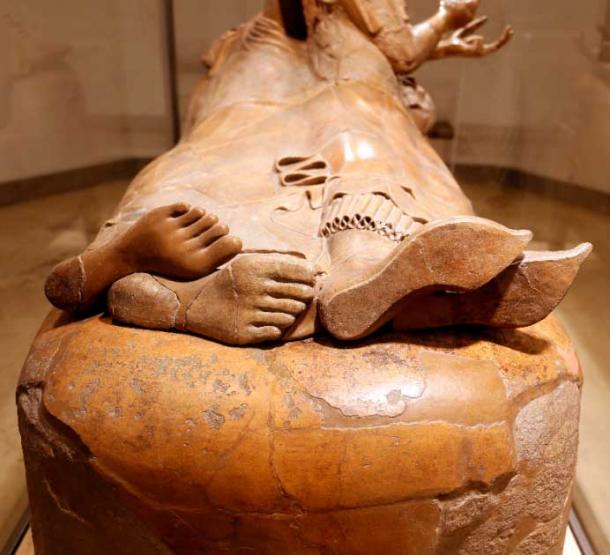 Close-up detail of the feet on the Sarcophagus of the Spouses (Sailko / CC BY SA 4.0 )

In short, the sarcophagus depicts a seemingly happy couple lounging upon a comfortable sofa….